Note:  This table is not currently legal in Minnesota and can't be offered for sale.

Once authorized, the actual table made available to licensed distributors in Minnesota may vary subject to final rule making.

Designed to bring enhanced accuracy, efficiency and entertainment value over the existing wheel related table.  The new table reduces error from tedious counting and recording of tickets and chips and calculating payouts.  It saves tons of paper while reducing the management time consumed in reconciling chip records to ticket records to drop box and on-site cash bank records.  All chip purchases, bets, payouts and even tips are recorded automatically.  The shift or nightly closing report informs of exactly how much money should be in the table drop box and in the cashier's (pull tab ticket clerk's) table bank.  Relieved of the more mundane and monotonous tasks, the wheel operator can focus more on the players.  This is exactly where entertaining forms of neighborhood gaming should concentrate - ensuring players have fun for their money.  When the value of a good time at the right price is met, players will return to make gaming a regular night out.

Example below is approximately 3' x 5', inclusive of drink rail (red/brown).  The light green area is all electronic touch sensitive display that would rise 5 or 6 inches above the drink rail.  The section on the right is the operators station with a separate screen used to issue and redeem chips, accept tips, order spins.  The table seats comfortably six players.

Conduct Summary and Comparison to Existing:  The existing Minnesota Tri-Wheel® has players passing money to the wheel operator who then provides the player chips of equivalent value.  The cash is plunged into a double locking drop box mounted and locked to the table.  So far, this is exactly what will happen on the electronic table; however, the chips are virtual and the operator does not need to count them out.  Instead, the operator enters the amount received and the denomination of the chips desired by the player, the computer provides the right quantity of chips to the position at the table the player is sitting (1 - 6 beginning on the left of the operator).  Each position has different colored chip rim combinations.

A big difference between this table and the original is that players do not need to acquire serial numbered paper tickets for each of their bets, mark their unique identifier on the back of each ticket and place all of the tickets they purchased in slots associated with each possible bet on the table. Instead, players merely move their chips to where they wish to bet.  Of course, all of the chip traffic on the table is recorded, providing greater accuracy and much quicker auditing than with the existing chip - ticket system.  The numbers on the chips at each player position is indicative of the quantity of chips that player has, not the value of the chips.  One player may be using $1 chips while another could be using 10¢ chips while still another is using 50¢ or $2 chips.  The system knows the value of each person's chips.

Once the wheel has gone through a simulated spin, the losing bets vaporize in a poof of smoke while the winning bets have their chips expand and pop up to the amount the bet has won as they move to the players stack added to the players previous balance.  The operator does not need to manually figure out how much to pay the player, mark each of the winning tickets (their are none) with the amount being paid and count out the winning amount of chips and slide them over to the player.  That is automated.  There should be no room for error by the operator in payouts.  There should be no operator or environmental bias in the wheel.  This is accurate and efficient without the need to securely store, count and audit thousands of tickets.  The operator can spend their time making sure the player's questions are answered and in keeping an entertaining and fun atmosphere at the table. 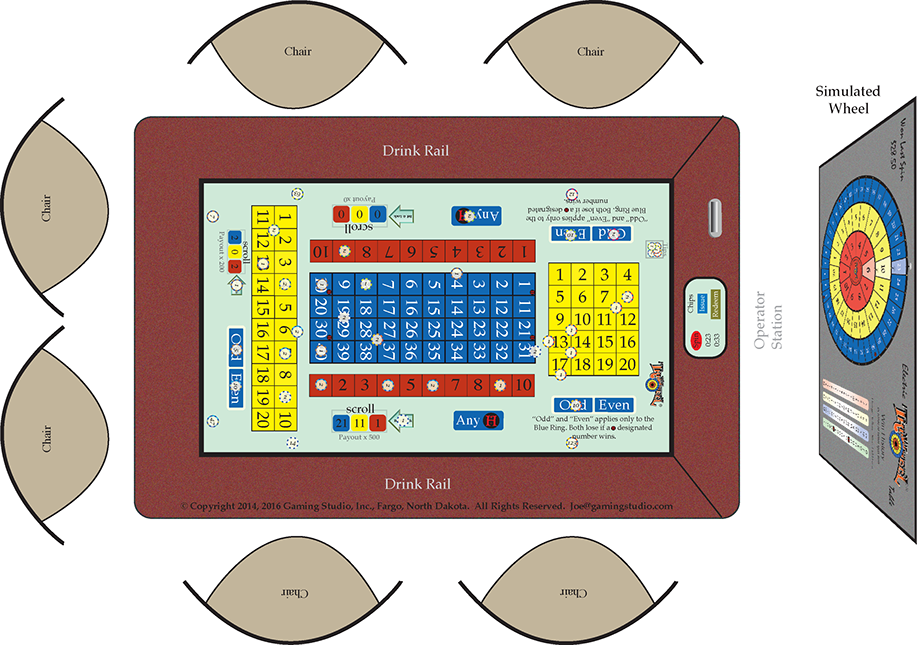 Betting Layout Graphics: Very similar to the betting options on the original slotted (ticket) table.  However, freed from the need for those slots, electronics has the advantage of allowing for additional wagers.

Placing bets:  Instead of placing tickets in slots, players move their virtual chips to where they wish to bet.  Want to bet two chips - move another on top of the first.  Once the wheel operator has ordered a spin, the table is locked down - nothing moves or changes until after the spin and the payout. 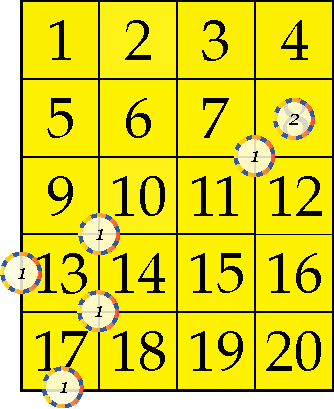 Row Bet.  Placing the chip on the line outside a row of numbers means a bet that any of the four numbers in the row (13, 14, 15 or 16) will win.  If so, the player would win 1/4 the multiple of a single exact number bet.  This bet does exist on the slotted table.

Column Bet:  By placing the chip on the line below a column of numbers, the player is betting that one of the five numbers ( 1, 5, 9, 13, 17) in this column will appear a winner in the next spin.  If the player has guessed right, they will receive 1/5th the multiple that they would have received betting an exact individual number.

Exact Number:  Standard bet available today - a bet that that very number will appear as a winner in the Yellow Ring.

New bet.  A "Quad" whereby the player is splitting their bet among four numbers.  Any one of those numbers appears as a winner in the yellow ring, the player wins 1/4 the multiple they would have won with a standard exact number bet.

Column Bet:  By placing the chip on the line at the head or foot of a column of numbers, the player is betting that one of the ten numbers (31 - 40) in this column will appear a winner in the next spin.  If the player has guessed right, they will receive 1/10th the multiple that they would have received betting an exact individual number.

Exact Number:  Standard bet available today - a bet that that very number will appear as a winner in the Blue Ring.

New bet.  A "Quad" whereby the player is splitting their bet among four numbers.  Any one of those numbers appears as a winner in the yellow ring, the player wins 1/4th the multiple they would have won with a standard exact number bet.

The        symbol appears on the Blue Ring of the wheel as well as the layout on four different numbers (1, 10, 21, 30).  If one of those numbers is indicated as a winner, all "odd" and "even" bets lose.  This exists in the game today; however, here we provide players an ability to bet the        numbers as a hedge against losing their "odd" and "even" bets.

This is not a new bet.  Instead of taking six numbers for the "house," as with the manual table, we advise taking only four.  Part of the reason is that there is no longer a cost associated with each bet (ticket costs were in the neighborhood of 2.6¢ each or 2.6% of a $1 bet).  Absent that cost, the players should be given a better deal.

The electronic nature of the Tri-Wheel® allows for each ring to be separate random events within one larger spin context.  Thus players are able to bet an exact number in one ring coupled with one or two exact numbers in other rings.  Below are three different examples.  The first shows the non-use static state where all rings have "0" meaning no selection while the second shows selections only in the Blue and Orange Rings and the third shows selections in all three rings.

Scroll - is exactly how players move the numbers to those they want in each of the rings.  They merely vertically scroll to their choices.

Multi-Ring Bet:  Player is betting 1 unit that "2" will appear in both the Blue and the Orange rings.

Multi-Ring Bet:  Player is betting 1 unit that "21" will appear in the Blue Ring at the same time as "11" appears in the Yellow Ring and "1" appears in the Orange Ring.  Should this happen, the maximum payout would be 500 times the value bet.

Payout:  Once the player begins to select numbers in two rings, the maximum payout multiple appears.  If they pick three, the multiple shows below as 500.  If they select only one number at the time the bets are closed for a spin that selection will revert to "0" and any chip placed is returned prior to the actual spin.  If those two numbers appear in the same spin event, the player will win 200x the unit value represented by the chip placed.  If they catch only one number, they will win a smaller consolation. 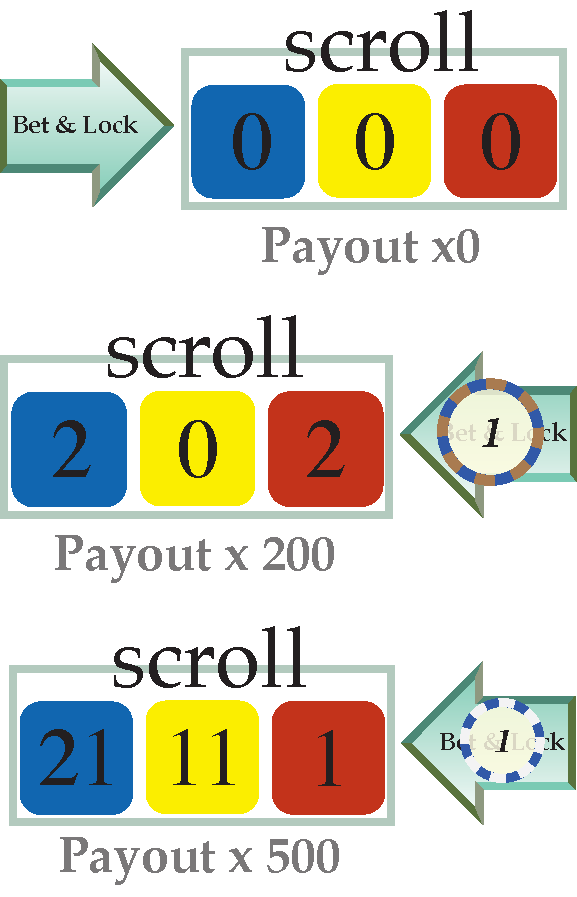 Payout:  After a spin is completed, the losing chips blow up (simulated puffs of smoke as they disappear), followed by the winning chips expanding in size and wracking up numbers with some dedicated sound.  The payouts are all automatically calculated by the computer.  Generally, we are recommending payouts that allow for a house advantage of 10%.  This compares with approximately a 5% house advantage in the table card game "21" which is played in tribal casinos.  The game needs to be competitive.